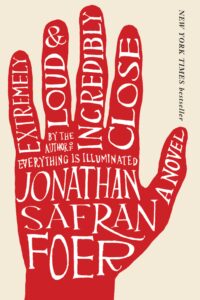 Oskar, the nine-year-old protagonist of this novel, is vegan and only wears white.  He is extremely precocious and incredibly imaginative; always creating new inventions in his mind.  After his father is killed in the Twin Towers on 9/11, with his body never found, Oskar's tendency towards fear, worry, and anxiety is further augmented by grief and survivor guilt. Oskar describes his sorrow and sadness as "heavy boots" ... a delicious and meaningful metaphor.

Oskar finds a key in a blue vase in his dad's closet after his dad dies. He decides to find the purpose of this key, which is in an envelope with "Black" written on it. He figures out that Black is last name of the person who knows something about this key, and he decides to visit everyone in New Your City with the last name of Black, in alphabetical order of their first name, not geographic order.  He walks wherever he goes in New York City, as he has a fear of public in transportation, heights, and bridges.  He always carries a tambourine, which he shakes to try to calm himself. Oskar is also insatiably curious, brilliant, and has a huge range of interests and an amazing memory for obscure facts.

There is a strong secondary plot in Extremely Loud & Incredibly Close, through which we are exposed to a long series of letters written by Oskar's grandfather to his unborn child (a bit confusing at times, this.)

The novel is extraordinary.  It has an odd and quirky plot.  The writing is magnificent.  Just a single sentence from page 165, to offer a flavor of the writing: "He looked at me and through me at the same time, like I was a stained glass window."

This is the second time I read this book. RARE for me!   It came up in a recent conversation and sounded like a good idea to reread.  Thanks, Joanne.