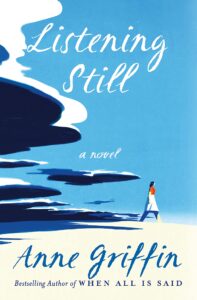 Regular readers of Dusty Shelves know that I have an affinity for debut novels.  It is refreshing to hear a new voice, and you can just FEEL how hard they worked to get it right.  And then they publish their second novel.  And sometimes the artistry and magic do not carry over into manuscript number two.  I fear that is the case with Anne Griffin.  Listening Still is just not in the same ballpark as When All is Said (see my review in Dusty Shelves).

The plot is wonderful!  Jeanie Masterson can hear the last words of the dead and they can hear her. Her father also has this gift, and together they run the family business ... a funeral home in Ireland.  The ONLY Irish funeral home that talks with their dead.  We watch Jeanie as she enters her teenage years, falls in love twice, and tries to manage her varied emotions when her parents tell her they are retiring to the coast, and leaving the business to her.

Sometimes when you hear the dead speak their last words (while lying in their coffin), you decide the words are too painful to pass on to friends and relatives.  Sometimes not.  But Jeanie and her father find themselves in such situations often ... and this sometimes-withholding and sometimes-giving becomes the way of not communicating with her family and friends as well.

There are a variety of secondary characters who serve as foils to Jeanie and are often delightful.  Her Aunt Harry who works as an embalmer in the business; her friend Niall from the toddler days who waits and watches while Jeanie falls in love with someone else; her deliciously autistic brother Mikey; her best friend Peanut; and Arthur, the postman, all move the story forward.

However, the fatal flaw in this book is the main character, Jeanie.  A number of reviewers wrote that Jeanie frustrated them, because she cruelly spends years not answering the questions of people who love her, leaving herself and them hanging, with no end in sight. I didn't find Jeanie as frustrating as I found Anne Griffin.  Jeanie is a shallow character, and we see only her external behaviors and not her inner soul.  I checked twice to see if this is a YA book, and it is not. It has that sense of action with no depth to it ...

This was a quick read and an easy read.  If you are looking for something to lightly entertain you this weekend, this is a good choice.  If you are seeking something with profound meaning that will cause you to think, I suggest you look elsewhere.