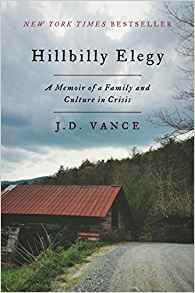 This is a tough blog to write!  Hillbilly Elegy is difficult to compartmentalize.  The book is a memoir by a man who grew up in Appalachia and eventually left.   He tells his personal story about being poor and white in Appalachia, and attempts to draw sociological conclusions from it.   His memoir is much larger than the analysis.  This disappointed me.  I wanted more of a researched, nuanced analysis.

The first half of the book is pure story.  I was rather amazed at the direct parallels to my own life.  JD writes a great deal about the physical and emotional connection among family in Appalachia.  My mom, in Detroit,  married the boy across the street.  Two of her sisters married two brothers from a few doors down.  There was a time when all of my family was concentrated in just a few blocks in Detroit.  And then came “white flight” to the suburbs and the next generation departed, leaving only my grandparents to die in the city.  While my mom was not quite as addicted as Vance’s mom (prescription drugs for my mom, not street drugs) and certainly did not go through boyfriends and husbands like Vance’s mom, still there were parallels in how these women related to and abandoned their children.  And I had to laugh at the section about Appalachia adults hating Japanese cars.  Well, being from Detroit, this was a common sentiment!

I later learned that many readers could not relate to this family dynamic at all.  It occurs to me that it is a common dynamic, perhaps, in the cities that were populated by early 1900’s immigrants … Italians, Poles, Serbs, Germans ... all looking for better work in America.  Chicago, Detroit, St. Louis ... all of these towns experienced some of what Appalachia did, though with less debilitation.

In the center of the book, pages 139 – 142, the author begins to hypothesize how Appalachia Democrats became Republicans.  It is an interesting, if very cursory, explanation.  Frankly, it is not very complimentary, making Appalachia sound reactive and resentful.  A bit later, around page 191, he talks about sentiment regarding President Obama and social changes of that era, and he presents the opinion of his people as though it is all made up; not grounded in any fact.

Near the end, Vance attempts to rescue his book (okay, I KNOW I am attributing to him something he would never attribute to himself!!) and he presents some useful and insightful arguments for what has occurred in this region of the country, and what can help.

My friend Deby found the author’s writing “annoying.”  I did too, though neither of us could put our finger on precisely why. My best explanation is that this is written like a “How I spent my summer vacation” essay.  It is chronological and rather immature in writing style.

That all being said, I actually think you should read this book.  I am completely confident you will not agree with all of my opinions, and that is what is interesting and where the learning is.  I am fascinated to hear what you think of this book. I know many of you have already read it. Please opine!