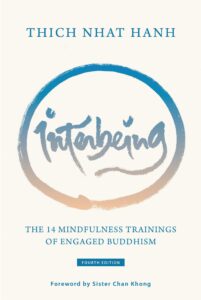 There is an apple sitting on my counter. As I look at it, if I bother, I can envision the interconnection of this apple. I think about the person at Whole Foods who piled it attractively.  Was it the handsome guy with the beard, or the woman who is often grumpy?  I imagine the truck driver who brought the apple and a myriad of other fruits and vegetables to the loading dock. Then I travel back to the person who picked the apple. The apple itself was fed by the rain and warmed by the sun.  The tree on which the apple grew has deep roots into the earth to tap the nutrients there.  The squirrel or pica consumed a seed and dropped it where it took root and apple tree grew (or maybe a human planted it there). And, if this is not enough, think about the path and the people involved in making the box that the apple was shipped in.  Think about the origins of the truck and the metals and the fuel that brought the box that carried the apple.

This is all the concept of interconnection, and I became very aware of it by reading Braiding Sweetgrass, by Robin Wall Kimmerer.  (Please check out my blog posting).  Interconnectedness among native populations is (author not identified):  "This all-encompassing world view embraces the idea that people are tightly connected to their communities, to their ancestors, to future generations, to the lands on which they live and to all of the animals, plants and even inanimate objects that reside on these lands."

I was delighted to discover a similar concept in my research on Buddhism. Thich Nhat Hanh coined the term "Interbeing" and although similar, it is not quite the same. This book, Interbeing, gives you a sense of what all this means in Buddhism ... all fourteen mindfulness components, including Freedom of Thought, Awareness of Suffering, Taking Care of Anger, Right Livelihood, and ten others,   Thich Nhat Hanh turns this concept into something complex and diverse.  And thus, this can be an interesting, useful, and educational read.  Pages 29 - 84 explain and teach about the 14 “trainings.”  This is where the wisdom is.  These pages are preceded by 48 pages of introduction and context setting that doesn’t say much, and the last large section is irrelevant to new learners as it is about the Order of Interbeing ... the structure and the organization that is dedicated to understanding, educating, and revising the mindfulness trainings.

Hahn has a delightful, engaging tone.  I understand he is wonderful to listen to.  AND, I now know just a modicum about Buddhism; just barely enough to begin to have an opinion.  And my present opinion is, "My goodness, so many people/Buddhas have made this all very complicated and complex!"  So far in my learning I have read about Four Noble Truths, the Eight-Fold Path, 14 Mindful Trainings, Ten Precepts, Nine Virtues, Three Sins, Five Powers, and 31 Realms. As with every Buddhist book I have read so far, Interbeing loses a lot of meaning when the teaching is made so complex and non-memorable.  Another case of a large amount of filler to turn a simple concept into a book.  So, enjoy the middle of this book if you wish!