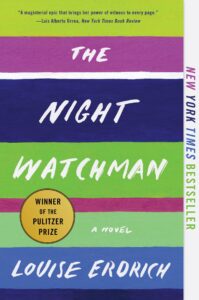 Louise Erdrich has written 28 books, and won a Pulitzer Prize for this novel, The Night Watchman, based upon her own grandfather's life, who was in fact, a night watchman, and fought against Native dispossession in 1953.

Thomas Wazhashk is the night watchman at the first factory located near the Turtle Mountain Reservation in rural North Dakota. He is also a Chippewa Council member who is trying to understand the consequences of a new “emancipation” bill on its way to the floor of the United States Congress. The bill is actually a “termination” bill that threatens the rights of Native Americans to their land, their cultures,  and their identity.

Patrice, trying to overcome her childhood name of Pixie, works at the plant also.  With a devastatingly alcoholic father, and a delightful mother, Zhaanat, Patrice works both hard and competently.  She takes a short leave from work to attempt to track down her sister Vera and Vera’s baby, who have disappeared.  Patrice travels by train to Minnesota, where she immediately is thrust into a world of exploitation and violence and endangers her life.

Before the story is complete, a number of the significant characters make their way to Washington DC on a three-day train trip, to testify to Congress against The Termination Act of 1953.

One reviewer described this book as “a mosaic of voices.”  An apt phrase!  Yes, there are many characters (I sought out and downloaded a character list), and they DO create a mosaic, because no two are alike.  They each have their own personalities, quirks, views, and histories.

Erdrich is an elegant writer. I enjoy her words, phrases, sentences, and flow.  I believe she did a phenomenal job with the development of the main characters (something I often grouse about in my blog postings, eh?) ... Thomas, Patrice, Zhaanat, (even the ghost, Roderick) and a few others.  But the novel won three hearts from me because I felt the story was disjointed.  At times it was hard to follow.  At other times, it simply didn't flow; it was choppy.  Great writing, great characters, troublesome plot line.  It is a good thing for Ms. Erdrich I am not on the Pulitzer Prize selection committee!  Ha ha!

All in all, I suggest you read The Night Watchman and form your own opinion.  I don’t think you will be disappointed.  This is our January book club read, so I look forward to a juicy conversation!