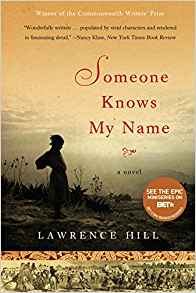 The book is the perfect follow-up novel after reading Homegoing and learning about the slave trade, and appreciating The Underground Railway about slavery and the fight for freedom.  Someone Knows My Name is another fictionalized book about slavery, but in this novel, the slave truly does gain her freedom.  Her journey from Africa to South Carolina to New York to Nova Scotia to Africa to London is a truly remarkable story.

Solidly based in history, Aminata Diallo is stolen from her African village in 1756 when she is eleven.  She endures many hardships, cruelties, and humiliations.  However, this novel explores her journey towards freedom, with its myriad of experiences -- disappointments, setbacks, mistrust, trust, and occasional compassion.  Aminata becomes the author of the Book of Negroes, a record of 3000 black women, men, and children who served the British during the Revolutionary War, in exchange for freedom and transport to Nova Scotia from New York and other places in the east.  (You can see The Book of Negroes in the National Archives of the United States, Canada, or England).

I loved this book!  It is well written, compelling, and fascinating.  It is about 500 pages, so it takes a while, but it is one of those long books that you don’t want to end ... every chapter reveals something new and intriguing.  Three times I checked to confirm that Someone Knows My Name was written by a man.  I am always in awe when I feel a male author can truly represent the thoughts, feelings, and experiences of a woman, and Lawrence Hill does that unerringly.  And then to reach the end and discover that he is a Canadian, born and raised in Toronto – I was even more impressed.  While he wrote about slavery in the not-yet-united-states, I suspect he was inspired by the role Nova Scotia played in the salvation of these slaves.

I fully recommend Someone Knows My Name. And I am very grateful to Jan D, from the Casting Crew book club, who suggested in this book as a 2016 read, and when we rejected it, fought for it again in 2017.  She was right all along!

10 responses on “Someone Knows My Name”