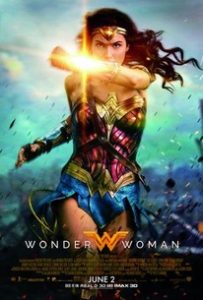 Yes, I'm traveling outside my own box here and reviewing a movie, Wonder Woman, viewed yesterday with my friend Deby.  There's a lot of hype about this movie, especially from, about and for women.  And hype it is.

I enjoyed the first two-thirds or so.  I thought the story of Wonder Woman's roots in the community of Amazons, and the visual imagery in this portion were both quite beautiful.  I also quite enjoyed her transition to London, and her wonder (no pun intended) at this world of men, poverty, filth, cars, fashion and general malaise.

But then Wonder Woman saves the world. And again. And again.  There was too much violence for me in the last third and, more important, the fighting sequences became boring.  I was anxious for it to be over.  There is a bit of a twist, but I saw it coming, so even that little surprise fell flat for me.  My chair was squeaking in the theater, so I was trying to be really quiet and sit perfectly still and it was HARD.

So, IMHO, see it, but don't expect to walk out awed.  Or inspired to save the world.