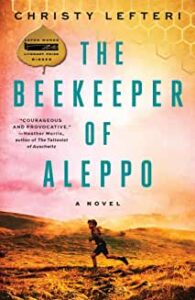 Nuri and his cousin Mustafa are beekeepers in Aleppo, Syria, along with Nuri’s wife Afra, who is an artist.  All is idyllic and calm, until war arrives, the hives are destroyed, and they must flee for their safety and to begin a new life in a new land.

Lefteri’s writing is captivating. A somewhat random example, “Afra’s soul was as wide as the fields and deserts and sky and sea and river that she painted, and as mysterious.  There was always more to know, to understand, and, as much as I knew, it wasn’t enough, I wanted more.”  (Pg 21)

What I liked is how deeply we become familiar with Nuri’s heart and soul.  What astonished me is how the realities we make up can be so clearly intertwined with the realities that are in the world we inhabit.  What confused me is how Lefteri intersperses Nuri’s and Afra’s challenging journey to England with their arrival in England.  The time frame shifts were not smooth for me; they were jarring.  I wish she had made the shifts clearer with chapter titles or some such.

This is politically insensitive of me, but I am simply tired of stories about people facing incredibly difficult challenges to move themselves from one place to another, whether as refugees or slaves.  I need new plots; I have become somewhat bored by their stories.

A Chinese concept I learned, that resonates, and that will stay with me from this book is that of (pg 303) “Yuanfen, the mysterious force that causes two lives to cross paths ...”

2 responses on “The Beekeeper of Aleppo”