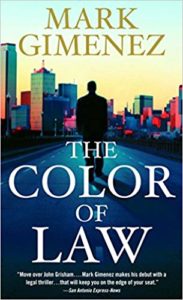 What fun to read a page-turning legal thriller by an author I have not read before!  Scott Fenney is the lawyer, earning $750,000 per year and all the perks at a prestigious Dallas law firm, when a Judge assigns him a pro-bono federal murder case.  Fenney is thrust into the moral dilemma of his life, between his law career to date, and doing some actual good in the world.

Senator Mack McCall is a presidential hopeful, about to announce his intentions, when his son Clark is murdered, allegedly by heroin-addicted hooker Shawanda Jones, whom he picks up for a night of drugs and sex.  Significant pressure is exerted on Scott Fenney by the political machine that does not want Clark’s sordid past to be introduced in the trial.  Most of the novel is about Scott’s battle within himself, way before he battles in the courtroom.

This is an easy enjoyable read.  Gimenez isn’t a perfect writer, IMHO.  He rather obsesses with the dilemma Scott is facing, and I found him repetitive in his description of the internal challenges Scott is facing as he loses all the structures that have come to define his life.  I wanted more depth and less repetition.  That being said, this was not enough to reduce my rating of four hearts.  It is still an engaging read, and I would like to try this author on a different novel.  He has published 14 and this was his first.

Thank you, brother David, for the new author suggestion!