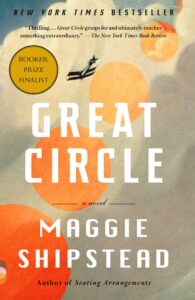 Shipstead is an exquisite writer!  Not only are her characters developed fully and deeply, but she also does magic with the language.   This is one long sentence from a two-page dialogue about Los Angeles.  "Then he said something about how L.A. is dust and exhaust and the hot, dry wind that sets your nerves on edge and pushes fire up the hillside in ragged lines like tears in the paper that separates us from hell, and it's towering clouds of smoke, and it's sunshine that won't let up and cool ocean fog that gets unrolled at night over the whole basin like a clean hospital sheet and peeled back again in the morning."  (Pg 265)

The story is mesmerizing and hard to put down.  There are two parallel tales.  One is the story of  Marian Graves, a young woman who learns to fly at the age of 14 in 1928.  (Some of what follows is loosely borrowed from a review in Outside Online, May 9, 2021).  A fictional female pilot, Graves disappears in 1950 while attempting an unprecedented north-south circumnavigation of the earth. She had only one leg left in her trip, a final leap from Antarctica to New Zealand, when she vanishes in the South Pacific. We learn about Marian's life, fictional, yet created through significant research of early female pilots, conducted by Shipstead.  She cargoes illegal spirits; she flies non-combat planes in WWII; she marries a criminal.  Her story is unorthodox, with desire, ambition, romantic entanglements, and a strong and clear sense of herself guiding her life.

Braided with Marian’s story is a contemporary narrative, set 100 years later.  Hadley Baxter is a troubled young Hollywood actor, who plays Marian in a film version of Ms. Graves' life. Marian and Hadley have more in common than just a casting decision: Hadley’s parents crashed into Lake Superior in a small plane when she was a toddler, and Marian's mother was lost at sea when she and her twin brother Jamie were babes in arms.  Both are raised by dissolute uncles.

Marian's life is fascinating, and we come to know her intimately, as well as her brother Jamie, and her most powerful love interests.  Hadley is also a deep character who struggles with fame but becomes fascinated by researching the Graves character she must portray.

No kidding, I highly recommend this book.  You will not be disappointed by the fascinating reality of early women pilots, as well as the intimate lives of Marian and Hadley.