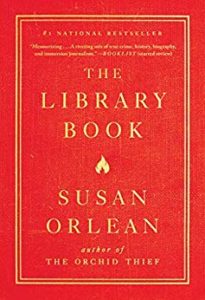 The Library Book tells the story of the unprecedented fire in the Los Angeles Public Library on April 29, 1986, in which more than a million books were lost or damaged. This is the story of the fire, and, to a lesser degree, the suspected arsonist.  Susan Orlean is an excellent writer; she does considerable in-depth research, and places herself right into the scenes and the characters.  I really like the way she weaves small informative details that make her story interesting with big important facts, translating the information to a human scale, like this from her long paragraph of what books were lost, on pages 33 and 34.  “…A first edition of Fannie Farmer’s Boston Cooking School Cook Book from 1896.  Twelve thousand cookbooks, including six books of popcorn recipes.”

While Orlean’s book is structurally about the LA Public Library, she also continually draws parallels with other libraries in the country and the world.  You get a sense of how libraries developed and thrived over the last 140 years or so. You will cheer the librarians on for their visions, as they transform libraries from book-loaning spaces to integral and central parts of the communities they serve.

At the beginning of each chapter, she lists four books and their call numbers which relate to the content in the chapter.  This is a fun resource ... it not only gives you a preview of the chapter, but it also may entice you to go pick another book off the shelf.  Like this, from Chapter 7, The Art of Condolence:  What to Write, What to Say, What to Do at a Time of Loss (1991) by Leonard M. Zunin, 177.9 Z95.  This for a chapter in which she quotes some of the condolence letters sent to the LA Library from other libraries after the huge fire….

So, why three hearts instead of four?  This was another sandwich book for me.  I love the beginning and the end; the relevance and the knowledge I gained.  However, in the middle, she spends longs pages – too long for me – on the history of the Los Angeles Public Library and its challenges, leadership, funding issues.  I became a bit bored with the LA-focus.  In sum, yes, I recommend this interesting book, with my only hesitation being the lengthy history section.

Finally, I want to share this tidbit, from page 93.  “In Senegal. The polite expression for saying someone died is to say his or her library has burned.”  Provocative, yes?

3 responses on “The Library Book”