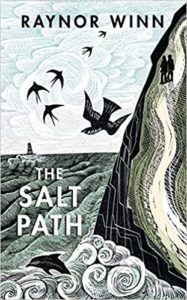 I love reading journeys of people who walk long trails, whether one of the big three here in the US, in Canada, the Gobi desert, or the Via Francigena.  But this is a different kind of long trail journey.  There was no hiking with bricks in the backpack to get ready, no planning, no packages of food sent to stops along the way, no farewell party.

Ray and her husband Moth, in their 50s, decide to travel the 630 miles of the South West Coast Path in England when they lose the home and farm they had restored and where they raised their two children, due to a failed investment with Moth’s best friend. They used up all their savings fighting for their home for three years, but ultimately lost the battle.  Suddenly, they were penniless and homeless.  But four days before that fateful day when the bailiffs arrive to take their home, they had worse news.  Moth was diagnosed with a debilitating and terminal disease.

This is their true story as they embark upon a journey to figure out what is next in their lives.  And it isn’t a pretty journey.  They are neither physically nor psychologically prepared, and they had only the mere basics of backpacking supplies, purchased from eBay.  But they had grit.  Boy, they had grit.

The Salt Path shifted again my view of homelessness.  To a person (almost) the people they meet physically back away the moment Moth or Ray tells them they are homeless.  As though it is catching.  As though they must be drug addicts or lazy, or as one man says, “tramps.”

I thought Ray Winn’s words were a little long at times, as happens when someone writes their own story.  But they were also beautiful, descriptive, artful even, especially as she describes in vivid detail the land, the birds, and the people they meet.

On page 268 I gasped aloud when a small monumental thing happens.  I was moved by this book.  It will stay with me for a while.  It is a story of challenge, devastation, hope, deep love, truth and, of course, grit.  Thank you to my wonderful friend Mary for, once again, recommending a real winner.

2 responses on “The Salt Path”