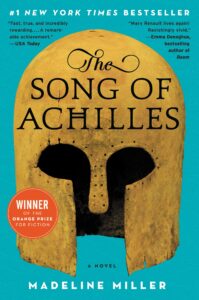 The Song of Achilles inspires me to wonder ... "Why do I read fiction?"  At first blush: to learn something from a different perspective; to sink into characters and personalities that differ from my own; sometimes to activate my brain to solve a mystery; and finally, most important, to be entertained.  This book does none of these.  I suppose I am to care because it is a new, deeper telling of a part of the Greek Mythology that I read in high school.  But that simply isn't enough for me.

I gave my earlier Madeline Miller book, Circe, four hearts:  "This is a beautiful, intoxicating, and brilliant book, extremely well-written and a page-turner."  I am rather surprised that The Song of Achilles did not captivate me in the same way.

I enjoyed the first third or so, about the relationship between the son of the god Thetis, Achilles, and the pure mortal Patroclus, princes both, as they grow from children to young men.  Their love is solid and true, and yet saccharine and cliche.  There is no tension either in their love, or the world’s acceptance of their relationship. It is six (nine?) years before Patroclus feels any anger towards Achilles.  That is not quite like deep love to me.

Eventually they embark on a ship to fight against the city of Troy, and, along the way, we meet more famous gods, such as Apollo and Chiron, and mortals such as Agamemnon and Hector.  The war with Troy drags on for ten years.  Ten years of war?  Oh goodness, put me to sleep.  I found Miler’s writing to be rather bland and sometimes repetitive. This section is filled with pride, posturing, maiming, violent and bloody killing, and subjugation.  And an occasional very kind deed, such as the saving of the young woman Briseis from the brutal Agamemnon.

One of the discussion questions asks about The Song of Achilles as a myth .... a story that is timeless. I will be very interested to hear what others see as the meaning or message in this myth.

I do not gleefully recommend this January Casting Crew Book Club choice!