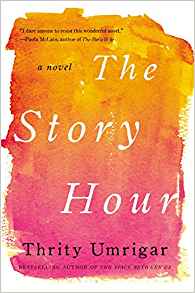 This is a story about the relationship between a young Indian woman, Lakshmi, who attempts to commit suicide, and her therapist, an African-American woman named Maggie.  Lakshmi is totally delightful.  She does not speak English well, but it takes you only a page or two to understand her. She uses words like “ascare” for scared and “courage” for encourage.  She doesn’t understand why “the husband” calls it a “coffee table” when thy only drink chai.  Throughout the book, we learn more and more about Lakshmi’s story, and how she came to be in the United States and the tragedies and joys of her complex life.  Fascinating.

On the other hand, Maggie has been drawn as a very shallow character.  She never does much of anything, and what we learn of her life is, well, rather immature and insensitive.  And so their friendship is a bit difficult to grasp.  A number of reviews I read were distraught that Maggie breaks the rules of therapy and befriends Lakshmi.  I, on the other hand, felt the other way.  I wanted her to eschew the rules and boundaries and really befriend Lakshmi, but she stays on the fence and emotionally distant.

I like a place of grounding in a book. If it is placed in Boston, I picture Boston. If it is Dubai or Atlanta, I will get out maps and be able to “see” the place.  I don’t know what Umrigar was thinking when she placed her characters in Cedarville.  That’s all we get to know.  I assumed that it was near New York, as the seasons began to change.  But then we learn that Maggie used to live in New York.  By the end of the book we discover that Cedarville is about 1000 miles from San Diego.  Huh?  At one point I googled Cedarville and discovered there was one in California and one in Ohio.  We learn in the first few pages that they are not in California.  So maybe it is Ohio. Until Maggie talks about the snow she sees on the mountains.  I felt, well, lost.

Read this book for Lakshmi and her Indian hertitage. Her story will stay with you and make you think.  Don’t read it as a tale of friendship between women; it would be a disappointing friendship for sure.

3 responses on “The Story Hour”