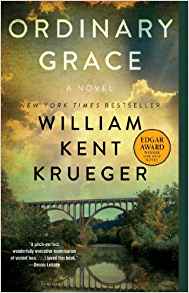 I remember one event clearly from the summer I was 13. I went to Bob-Lo Island, an amusement park on an island in the Detroit River, and met my first love, Randy.  What do YOU remember about the summer you were 13?  Well, this book is the summer Frank Drum was 13, and there is A LOT to remember!  Granted, it is a novel, so the author can imagine events in order to create richness of experience and memory.  And that he does!

Written from Frank’s perspective 40 years later, he tells a spellbinding story about the summer he was 13, during which accident, suicide, murder and deaths occurred.  Frank and his younger brother Jake live in a small town on the Minnesota River ... a town in which, in 1961, it was impossible not to know everybody's business, and all the interwoven goings-on.  This is a MUCH more interesting and intriguing story than my own first summer as a teenager.

Krueger also recalls and knits in the times so well.  An example: “She wore a pair of dungarees and a blue denim shirt over a white top and she’d bunched the shirttails around her waist and tied them in a loose knot in a way that I’d seen Judy Garland do in a movie about show people.” (page 238, large print edition).

Krueger isn’t a spectacular mystery writer.  I anticipated many of the events and “whodunits” before they actually happened.  But that didn’t really matter. The story held my interest.  This book actually kept me awake until midnight one night and 11:00 PM the next.  Very unusual for this early-to-bed-early-to-rise reader.

One response on “Ordinary Grace”