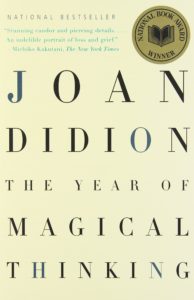 In the weeks after Beryl’s death, some friends told me I must read this book, and some told me to steer clear of it.  Well, that was enough for me to accept the challenge and pick up the book.  It didn’t upset me, as some anticipated.  It sort of bored me.  In a nutshell, it is her story about her husband’s sudden death in the middle of their daughter’s protracted very serious illness.  Didion writes honestly about this difficult year in her life.

I found myself becoming impatient with the details of her daughter’s illness because I was, just 30 days after Beryl’s death, much more interested in how she handled her husband's death.  Of course much of the book was also about his heart attack and death ... but much of her experience I could not relate to.

The gem for me in the book, however, is Chapter 17.   Early in this chapter she gives me a solid piece of wisdom to hang my hat on ... “Nor can we know ahead of the fact (and here lies the heart of the difference between grief as we imagine it and grief as it is) the unending absence that follows, the void, the very opposite of meaning, the relentless succession of moments during which we will confront the experience of meaninglessness itself.” (page 189)

2 responses on “The Year of Magical Thinking”