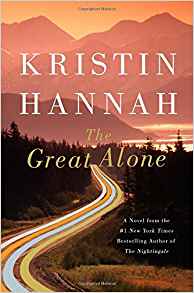 I don’t know Kristin Hannah’s work well, but it seems she has a real gift for breathing life into her characters.  The Great Alone is haunting and complex.

This novel takes place mostly in 1974 and 1978, with a resolution and completion in 1986.  Ernt Allbright has returned a changed man from serving in Vietnam, and he suffers nightmares, anger, and violence.  He can’t find his way back to the man he was before, even with the unfailing love of his wife Cora and daughter Leni.  After losing jobs and relocating his family many times, he finally decides to move them to a wild and remote corner of Alaska.  This is the Alaska that is fiercely independent, where people are isolated and all their energy goes to survival in a wild, beautiful, unrelenting, frozen land.

Leni is the protagonist in The Great Alone.  She is 13 when the novel begins, and this is her story about learning to love and survive in Alaska.  She struggles to reach womanhood, when her primary task is to attempt to protect her mother from her father, which she fails at over and over again.  There are other wonderful characters in the community in which the Allbrights carve a home.  The local wealthy guy, Tom; Large Marge; and Mad Earl ... whose names give you clues to their personalities!  And then there is Matthew.  But I'll leave you to discover these people on your own.

Before I began this book, and every single time I picked it up to read it, I had to take a deep breath (which is easier said than done since my bout with pneumonia) and steel myself, because there was a chance that Ernt was going to beat his wife Cora.  There's a lot of domestic violence in the middle third of this book.  Be prepared.

Hannah's depiction of the three main characters is what makes this novel, despite it's sad premise, compelling and difficult to put down.  Their intense and difficult love for each another, and how they fall in love with the challenges of surviving in stunning Alaska, will keep you glued to the page, and staying up later than you intend to.  Take a breath and be transported to a wild place of incomparable beauty and pain.

4 responses on “The Great Alone”