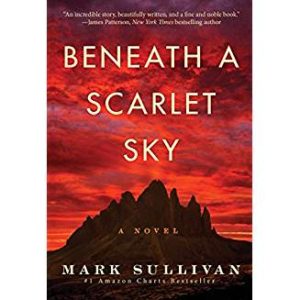 Pino Lella, at seventeen years old, led Italian Jews across the snow-capped Alps to safety in Switzerland., wearing hiking boots and skis. And then he became a spy for the Allies in the resistance.  This is his story – 23 months of his life from June 1943 to May 1945.  And it is an amazing story!  Some 140,000 Allied soldiers and 60,000 Italians died during Nazi occupation of Italy, but very little has been written about this part of history.  Historians call Italy “the Forgotten Front.”

Mark Sullivan spent over a decade researching Pino’s story.  He was able to speak with Pino, but very few others, about events that took place 70 years ago.  He has put together a very compelling read.  It is interesting, emotional, eye-opening, sad, and inspiring.

I did some research on this genre.  Ever since I read Beyond the Beautiful Forevers, I have been in love with what is most often called “narrative nonfiction.”  (Narrative nonfiction, also known as creative nonfiction or literary nonfiction, is a genre of writing that uses literary styles and techniques to create factually accurate narratives.)  Mark Sullivan tells us in the preface that he believes Beneath a Scarlet Sky is best called a “novel of biographical and historical fiction.” What we know is that the absolute backbone of this story is true, and has never been documented before.  Sullivan filled in the holes with fiction.  It feels as though the holes were few and far between.

Beneath a Scarlett Sky is moving and very well written.  It will draw you in as you read the opening pages and keep you transfixed.  It boggles my mind to read about the courage and brilliance of a 17 and 18-year old young man.  Oh yes, Pino also falls in love with Anna, a beautiful widow six years his senior, so you get some romance amidst the horror of war, too.  Yes, be sure this is on your Holiday List as a gift, and to read!

One response on “Beneath a Scarlet Sky”