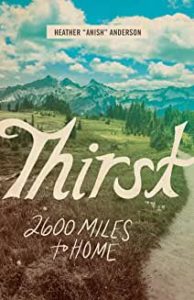 Heather Anderson was the fifth person overall and the first woman to hike the Triple Crown (the Appalachian Trail, the Continental Divide Trail, and the Pacific Crest Trail) in one year.   She holds the women’s Fastest Known Time (FKT) on the Appalachian Trail, and the FKT on the Pacific Crest Trail (PCT), having bested the male holder of that title by four days.  She is humble and not much interested in publicity.  She tried marriage and a job for a while, but they just didn’t take.

This is the autobiographical story of her 60-day record breaking PCT hike. This is no Wild.  Heather, whose trail name is Anish, is clearly a highly experienced hiker. Since 2003, she has hiked over 30,000 miles ... longer than the equator.  Thirst tells her story on the PCT, a solo hiker who does things her way (she hikes in sundresses!) for an average of 42 miles a day.  Aptly titled, she began in the desert at the south terminus on June 8 .... the hot dry desert.  This is a serious hiker’s journey.   As she is traveling alone, she is also quite introspective.  I found her philosophizing to be insightful and timely, though her self-esteem could use some reinforcement.  If you like wilderness adventures, you will eat this one up. (Or should I say, “drink” it up.)