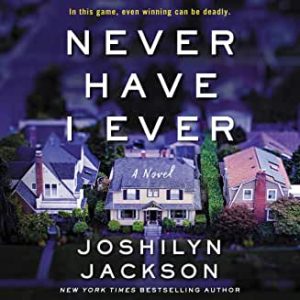 The story opens at a neighborhood book club.  Suddenly the woman renting the Air B&B down the street, Angelica Roux, knocks on the door and decides she is going to join.  Pouring excessive amounts of alcohol for all who are in attendance (none of which does she contribute), powerful Roux takes over the book club, eventually getting the drunk women to play an adult version of “Never Have I Ever” and revealing secrets about themselves they would not reveal to anyone.

I thought at first, this was going to be rather silly.  But it doesn’t take long to figure out that Roux is one very evil person, with her eyes set on blackmail.  As the tale progresses, it actually becomes a thriller, with Roux manipulating our major character, Amy Whey, through her painful past that Amy has held secret, even from her beloved husband, Davis.  Amy can neither give her what she wants – cash – nor reveal the sins of her past.  So she must figure out how to out-maneuver Roux.  And Amy has no experience at such detective work and maneuvering.

Roux's son Luca and Amy's daughter Maddy form another subplot, and scuba diving plays a major role in this drama from Pensacola, Florida.  This book was recommended by Time magazine in an article called “Summer Thrills.”  It is worth your time.  About half-way through, you may be turning pages as fast as I did.