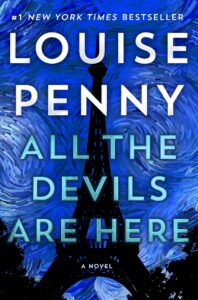 It was a struggle to wend my way through this Louise Penny.  Armand Gamache and his crew are in Paris, France, instead of the usual Three Pines.  Armand’s elderly godfather, Stephen Horowitz, is run over by a van, as the extended Gamache family emerge from dinner at a restaurant.  Who ran him over, and why?  And who is the man found murdered a few hours later in Stephen’s lodging?  And is the local chief of police, a longtime friend and colleague of Armand and Reine-Marie Gamache, really a partner in Armand’s investigation, or is he culpable in some way?

Sounds intriguing, no?  But I was never drawn in and fully engaged.  I was half-way through before I felt like I had a grasp on the cast of characters.  And Penny had an obnoxious habit of changing venues numerous times in a chapter, often without any more delineation than an empty line.  I do not recall this stylistic technique from the Three Pines novels I have read, but maybe I just didn’t notice.  As a highly visual person, it was disconcerting to see the characters sitting in the Gamache sitting room, and then suddenly to be in Jean-Guy and Annie’s apartment.

And the story?  Quite a surprise.  It is fiat.  No tension to draw me in.  There was mystery certainly, but it seemed Penny was writing “about” it, rather than taking us there live.  The denouement was unnecessarily complex,  though the last ten pages or so were sweet.  A disappointment overall.