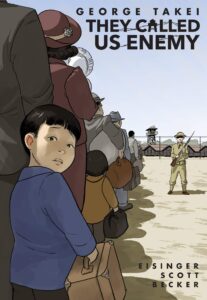 You know George Takei.  His popularity skyrocketed as Lieutenant Hikaru Sulu, and then as Commander Sulu, and finally Captain Sulu, on Star Trek.  He is an actor, an author, and an activist.  And he penned this graphic memoir.  He tells the story of being interred in American concentration camps, shortly after Japan attacked Pearl Harbor.

George was four when he was first relocated to a concentration camp with his parents, brother, and sister, along with 120,000 people of Japanese descent living in America, two-thirds of whom were American citizens, like George.  Somehow, remarkably, even though he was very young, he remembers an extraordinary amount of the trauma he endured and manages to tell us his family’s story through the eyes of a naive, innocent, and confused young boy.  He also brings us up to today, with various political and government actions since 1942.

I loved this memoir on two counts.  First, it tells an intimate candid story of a big scar on our American identity that many of us only know in passing.  You may learn some history.  For example, I didn't know about the differing levels of cruelty among the ten camps, from Tule Lake in California to Camp Rohwer in Arkansas.  Second, Takei tells his story with such a strong sense of reality, of what it was truly like to live behind barbed wire for nearly five years as a child.  I really felt and saw and witnessed his tender heart.

This is a short read, and one I recommend to all people in America.

One response on “Thye Called Us Enemy”