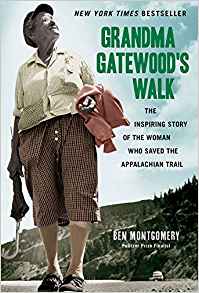 In the 1950s – in ALL of the 1950s – only 14 people completed hiking the 2050 mile Appalachian Trail, from Georgia to Maine (or from Maine to Georgia!)  One of them was Emma Gatewood, known affectionately and more famously as Grandma Gatewood.  With 11 children and 23 grandchildren, at the age of 67, she was the first woman to solo hike the AT.  In 1964, she became the first person to hike the entire trail three times.  Go ahead, do the math!!

Grandma Gatewood’s Walk is her story.  I know many of you are avid hikers, often on foot, sometimes via armchair.  In 2016, 1110 people completed the Trail, 29% of them women. As an avid reader of hiking books, and a four-year follower of Wired, as she travels around the world thru-hiking, I notice that today, hiking the AT is a very different experience from when Grandma did it.  Hikers today carry all their supplies in lightweight packs, spend most nights sleeping on the trail in tents and cooking their food. Interestingly, back in 1955, the Trail was so new and such a marvel, that Grandma Gatewood, while she did spend many nights sleeping under picnic tables, also spent many nights at the homes of people along the trail. She would knock on doors and ask them for shelter; something you wouldn't see today except in an emergency.

She was famous for wearing only “Keds” tennis shoes and carrying a small knapsack, with no sleeping bag, tent, or cook stove.  The author, Ben Montgomery, weaves in information about our culture at that time of Gatewood’s hike, and for the years immediately following, putting it in context for what hiking was like in the 50s, as well as the roles of women.  He worked with Gatewood’s diaries, her correspondence from the trail, her heirs, and also the numerous articles that were published about her once she was "discovered” on the trail.  And she is not Cheryl Strayed! Whether you loved or hated Wild, you will find Grandma Gatewood’s tale to be quite different and without the angst, errors, and inner turmoil of Strayed's hike of the Pacific Crest Trail. Grandma Gatewood simply walks.

Grandma Gatewood’s Walk is an easy and enjoyable read. It is also inspiring.  As I told a friend last night, it also makes me feel a bit languid ... I mean, I am not about to hike the Appalachian Trail. Nosiree!  And I am a few years younger than Grandma Gatewood.

My one criticism of this book – and it is not big enough criticism to lower my heart rating – is that Ben Montgomery clearly is a reporter (he is a staff writer at the Tampa Bay Times). As such, his writing is, I find, dispassionate.  After just completing Coming Into the Country by John McPhee, who clearly wants to pass on his passion and enthusiasm, Montgomery is rather emotion-less in his communication.

Nevertheless, you will be delighted to know this story better!  Emma Gatewood is an unsung hero of our modern day world!