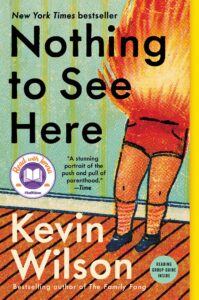 Ingenious, original, clever, witty, and touching.  Some reviewers say this book is about friendship.  I say it is about love.

Lillian struggles in her life, working at the Save-A-Lot in Franklin Tennessee.  She lives with her estranged mom, in the attic of the house she grew up in and has no friends.  Except for Madison.  Madison is an odd type of friend ... they knew each for a year at a girl's boarding school.  Lillian was thrown out before the end of that first year, taking the fall for Madison for illicit drugs in their room. And now Madison, who stayed in touch through letters, is married to a Senator and living in a mansion.  And she has a job for Lillian.

She asks Lillian to come to the mansion and take care of her husband’s 10-year-old twins, Roland and Bessie.  They had been living with their mother, but that ended when their mother died, and now the Senator has to figure out what to do with them; how to integrate them into his life with Madison and their toddler son Timothy.  Bessie and Roland will live with them for the summer, and Madison hires Lillian as a governess of sorts.

But these kids are not exactly normal.  They spontaneously combust when they get angry, anxious, or scared.  Yes, they literally burst into flames.  It does not hurt them, but the fire is real enough and burns their clothes, and anything combustible in the area. Yes, an odd premise (hence, “original, clever.") Somehow, Kevin Wilson pulls it off.  As a reader, I found I accepted the premise and became a cheerleader for Bessie, Roland, and Lillian. The tone is fun, irreverent at times, but also emotional and serious.  I found the friendship between Lilian and Madison to be intriguing for sure.  But the love that develops between Lillian and her two charges is the soul of this novel, I believe.

This is an easy read, and I do recommend it. The Casting Crew Book Club likes to read short, fun novels in February.   Thanks to Louise for suggesting this one! Nothing to See Here is fun, engaging, and will shift your perspectives on power, politics, and how inconvenient children can be.  The only criticism I have is the title.  I can’t ever remember it.  I would have preferred something along the lines of Fire Children or Fire Starter.