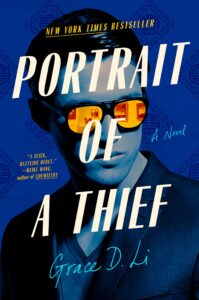 Portrait of a Thief received 3.5 out of 5.0 on Goodreads. Quite a low score!  So, I read a pile of GR reviews and, truthfully, they did lower my opinion a bit.  But let’s look at what we have here in Grace D. Li's reasonable attempt at writing a delightful first novel!

Li has crafted a story about five Chinese-American college students (some just beyond college) who are recruited to steal five important pieces of Chinese art, housed in five museums in Europe and the United States. Asian-American diaspora is actually the major theme of this book for Daniel, Lily, Alex, and siblings Will and Irene, not the thefts themselves.   I am intrigued by the angst of young people in their junior and senior years in college, wondering if and how they can succeed in the world.  I do not remember having such concerns.  I just assumed I would enjoy the rest of college and then go find a job.  I suspect this is a learning for me, as our characters self-define as American of Chinese heritage or Chinese-American. This book is more about what the characters expect of themselves and what their families and cultures expect of them, than it is about sophisticated heists.  While some reviewers scoffed at 20-something’s planning a major heist, I found the plotting and executing of thefts to be quite delightful!  Yes, they meet on Zoom and use Whats App and plan on a Google Doc.  No, they have no idea what they are doing.  At their first gathering they watch Oceans Eleven!  Yes, it is terribly fun!

I liked the characters.  It is true  they do not differentiate themselves very well.  I did not always remember which character was which, when we arrived at one of their chapters (The chapters are each perspectives from one character as the take unfolds).  Nevertheless, I found them interesting, and I recall them now as a gestalt, a compiled character.  One was a car racer in her spare time, one quit college to take an exorbitantly high paying job at Google.  One had a father who worked, coincidentally, in stolen art recovery.  They all were uncertain, youthful, brilliant, passionate, adventuresome, thought-provoking.

One of the major criticisms, I am chagrined to say, I didn’t notice at all!  And that was phrase repetition.  Apparently (one reviewer had her e-book count!) the air or sky is “full of possibility” at least 20 times, and “the curve of [character]’s cheek/lips” was repeated at least 10 times .

It is not a believable story … no one would really hire these five kids.  But, so what?  It is a novel!  I was entertained; I enjoyed the story; and truthfully, I learned something about being Chinese-American in this country, as well as a bit of art history, museum security, and had a small glimpse into the minds of today’s young adults.  I must come down on the side of recommending this debut novel.  It is a pleasurable read.  (Now … do I give it four hearts or three???)